Indy Parks is currently in the process of bringing our community together to imagine how to transform the former Riverside Golf Course into a multi-use outdoor adventure park for everyone. This project was conceived as part of the Riverside Regional Park Master Plan.

The project boundaries are within the area of White River Pkwy to the east, Cold Spring Road to the west, I-65 on the north, and 30th Street on the south. It contains the former grounds of Riverside Golf Course, which stopped operations at the end of 2019. This project will be an opportunity to transform the land from its former single use to a wide variety of activities and uses. 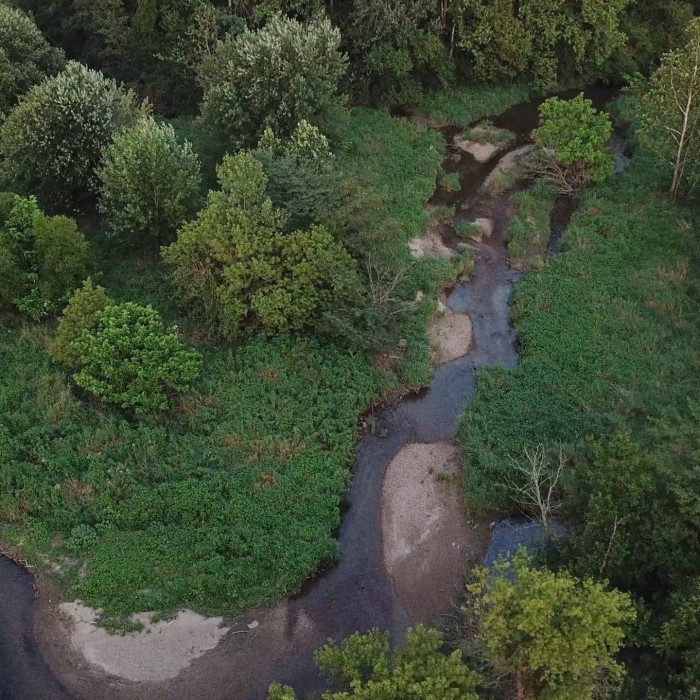 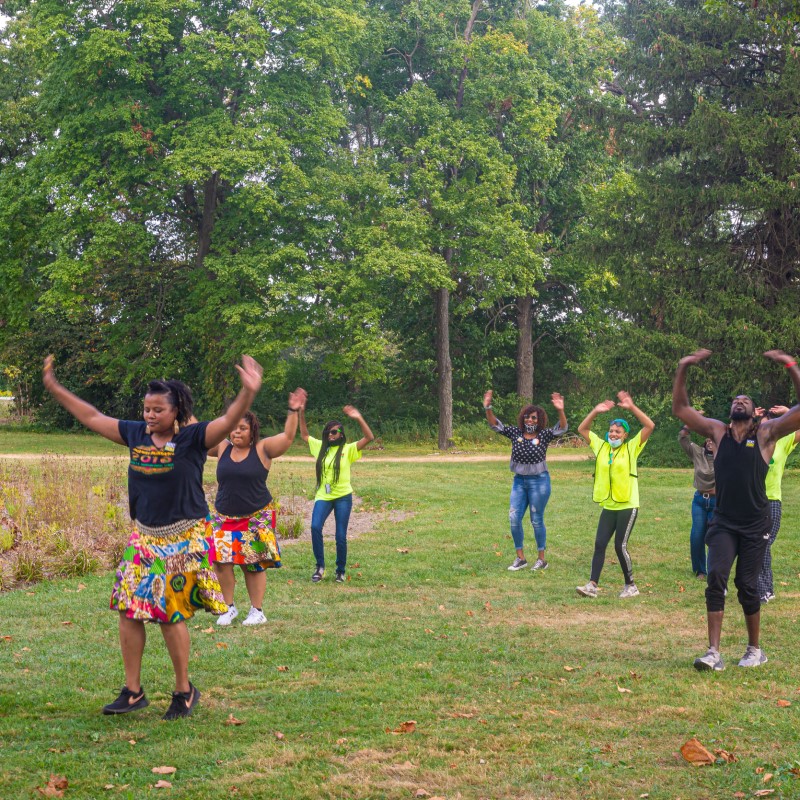 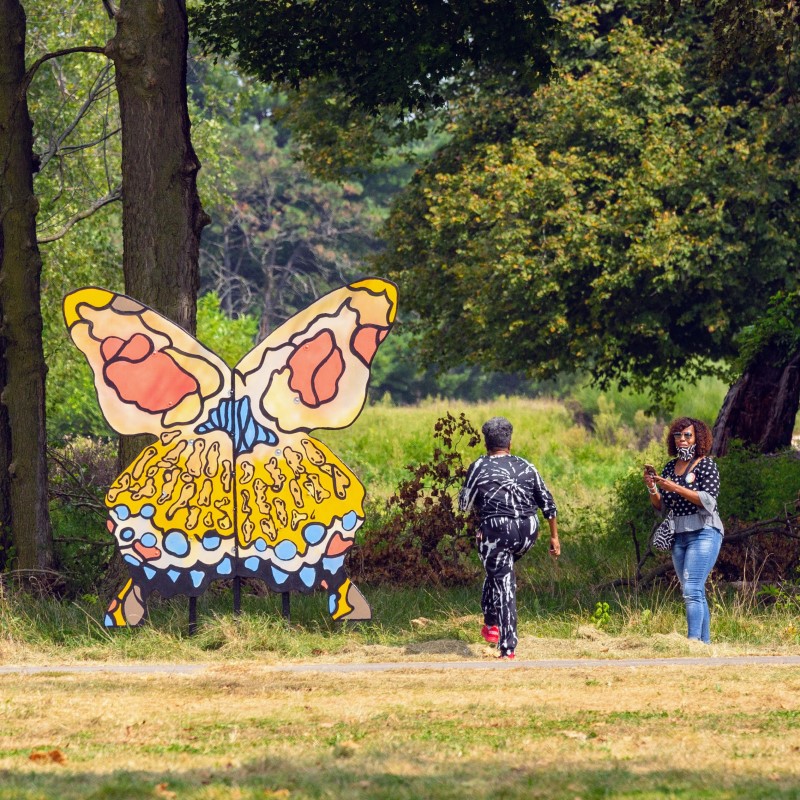 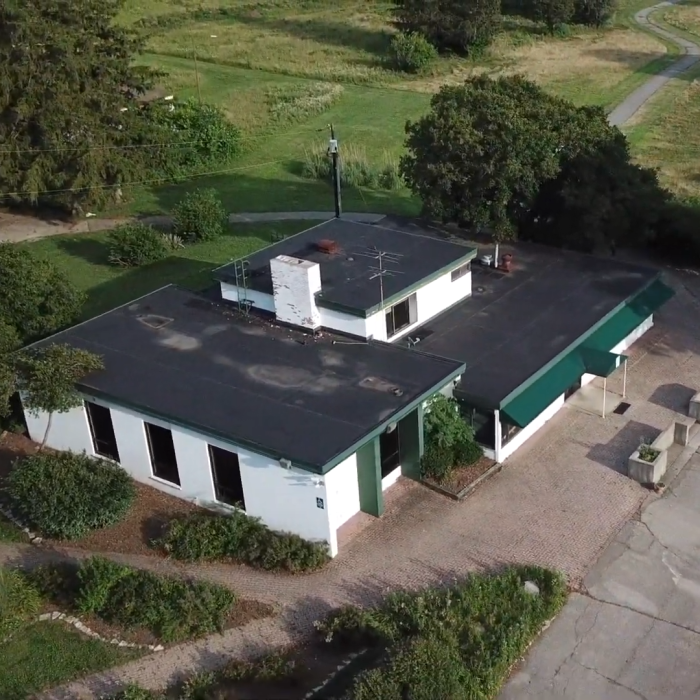 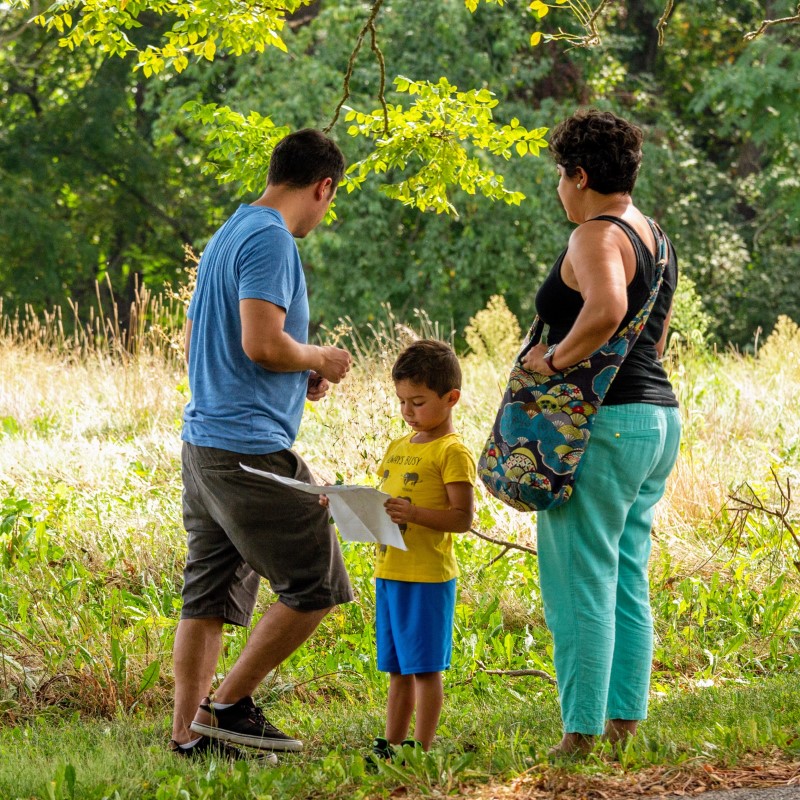 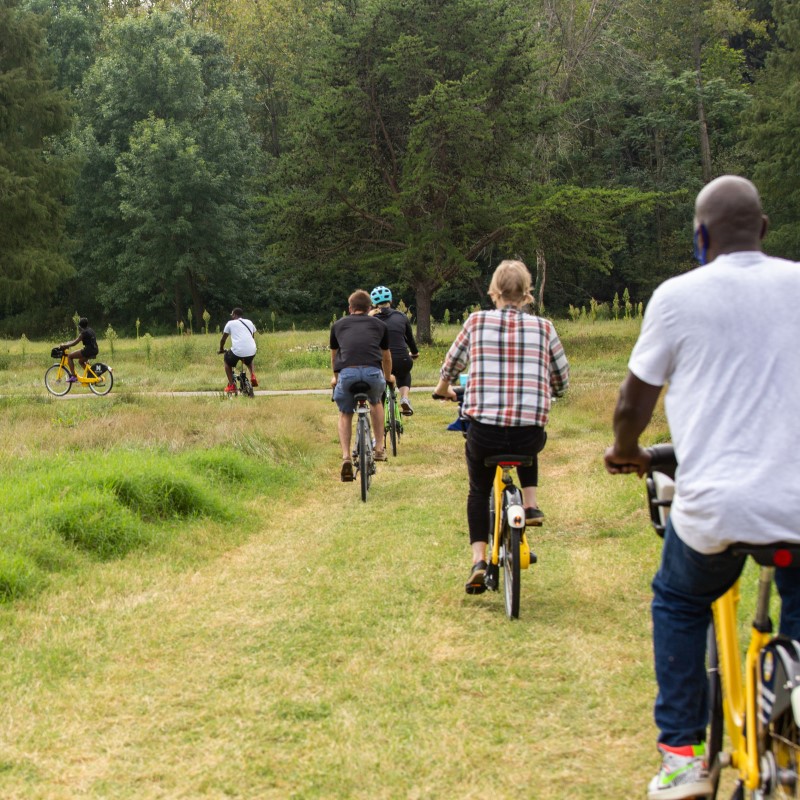 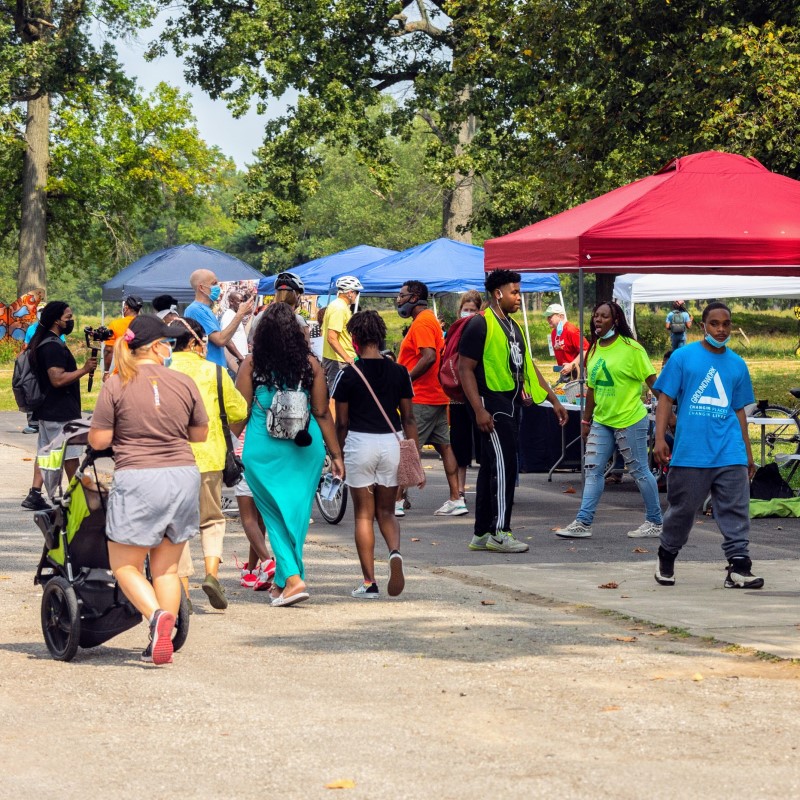 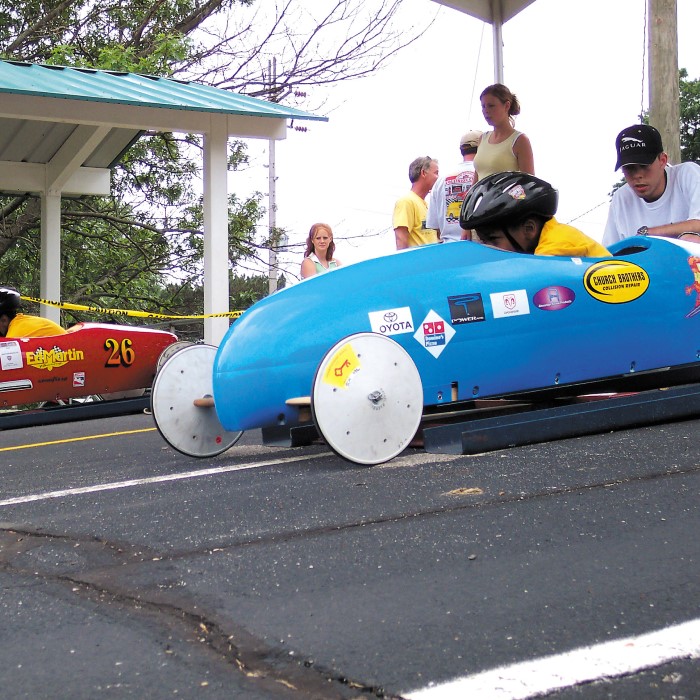 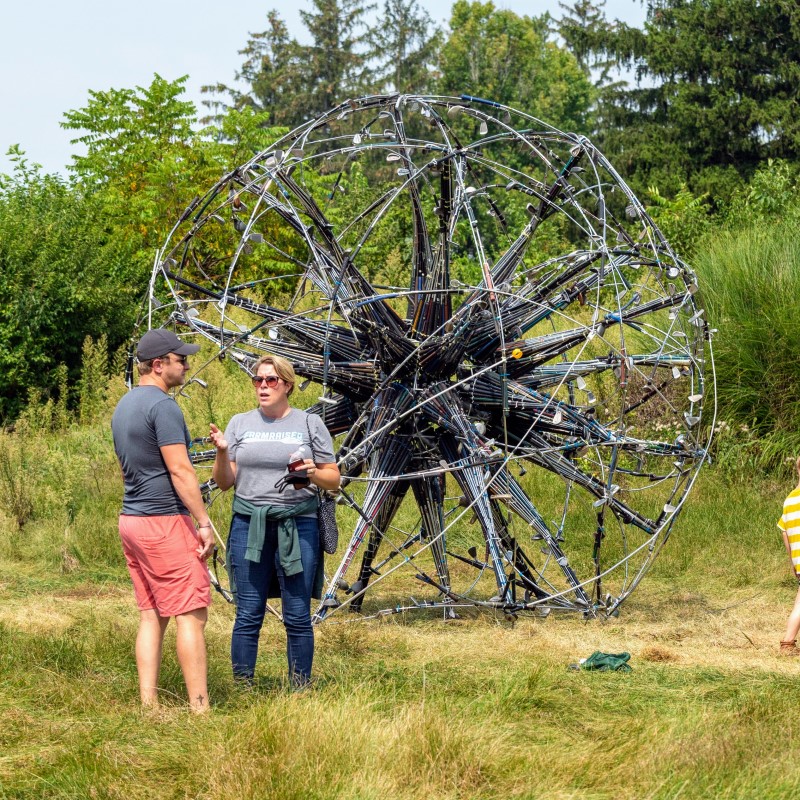 As a part of the process for transforming this park space and developing the new design and layout, a site inventory was conducted to map the existing conditions. Click the maps below for more information. 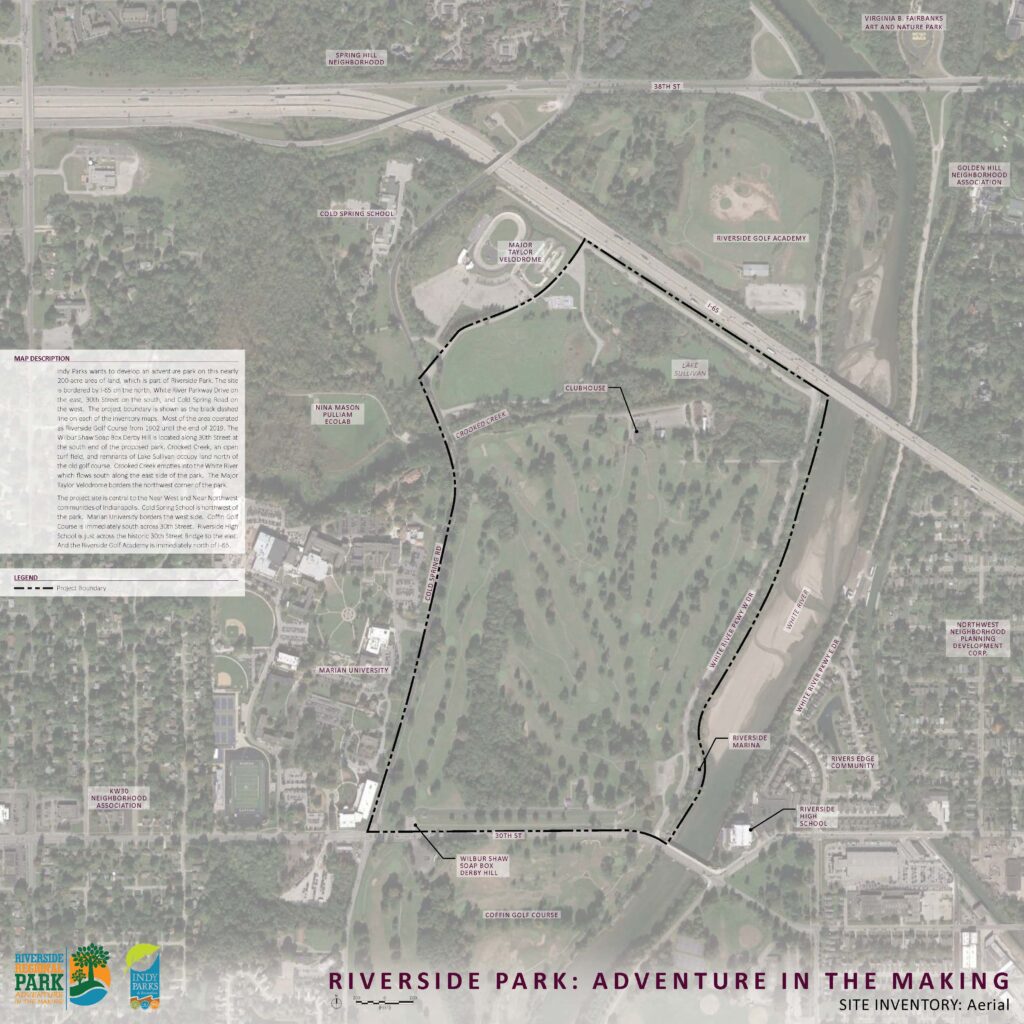 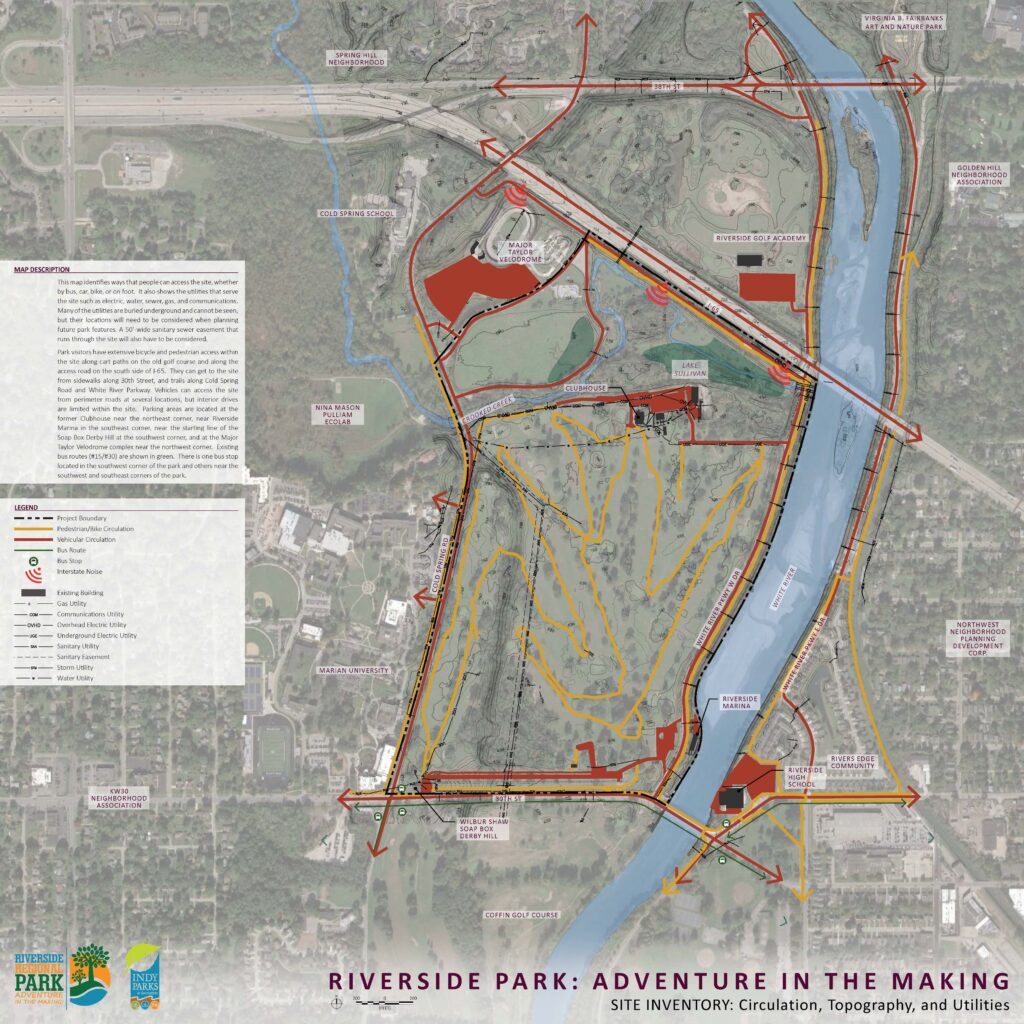 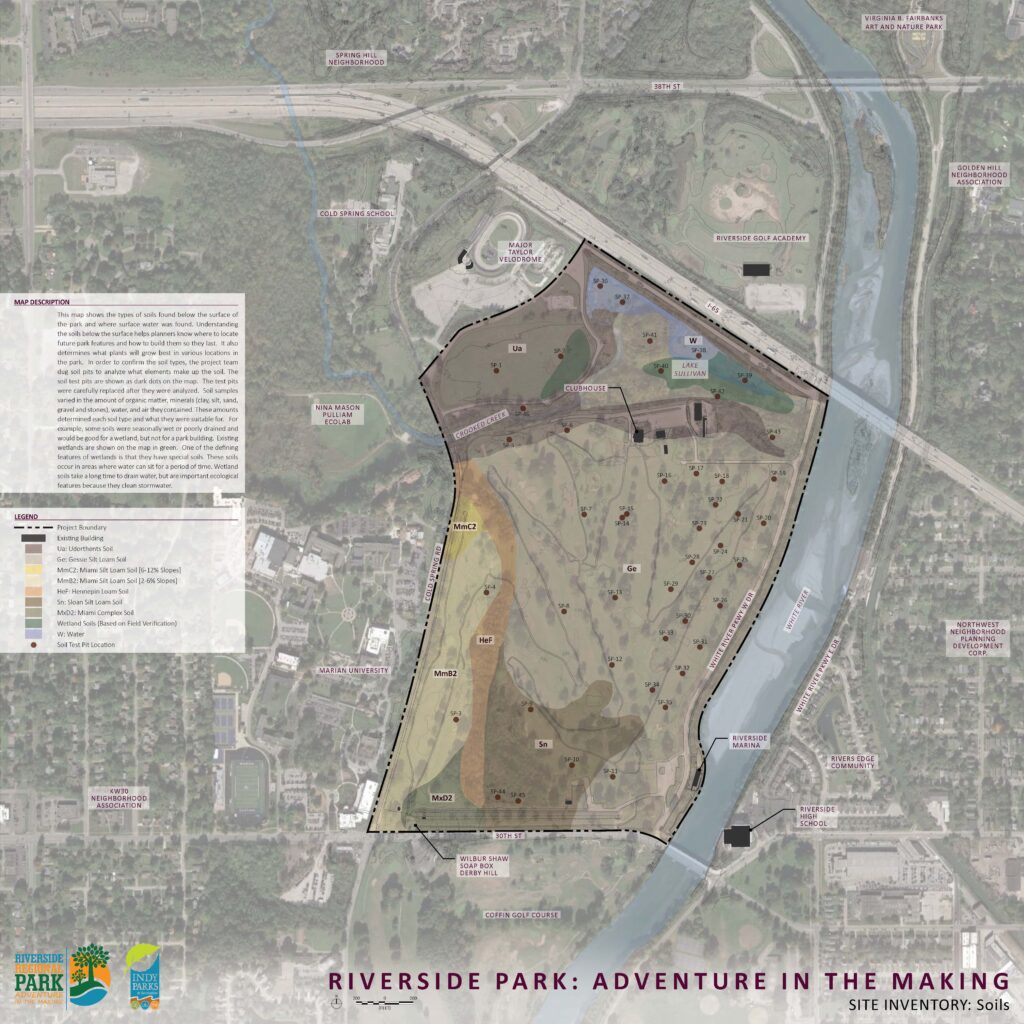 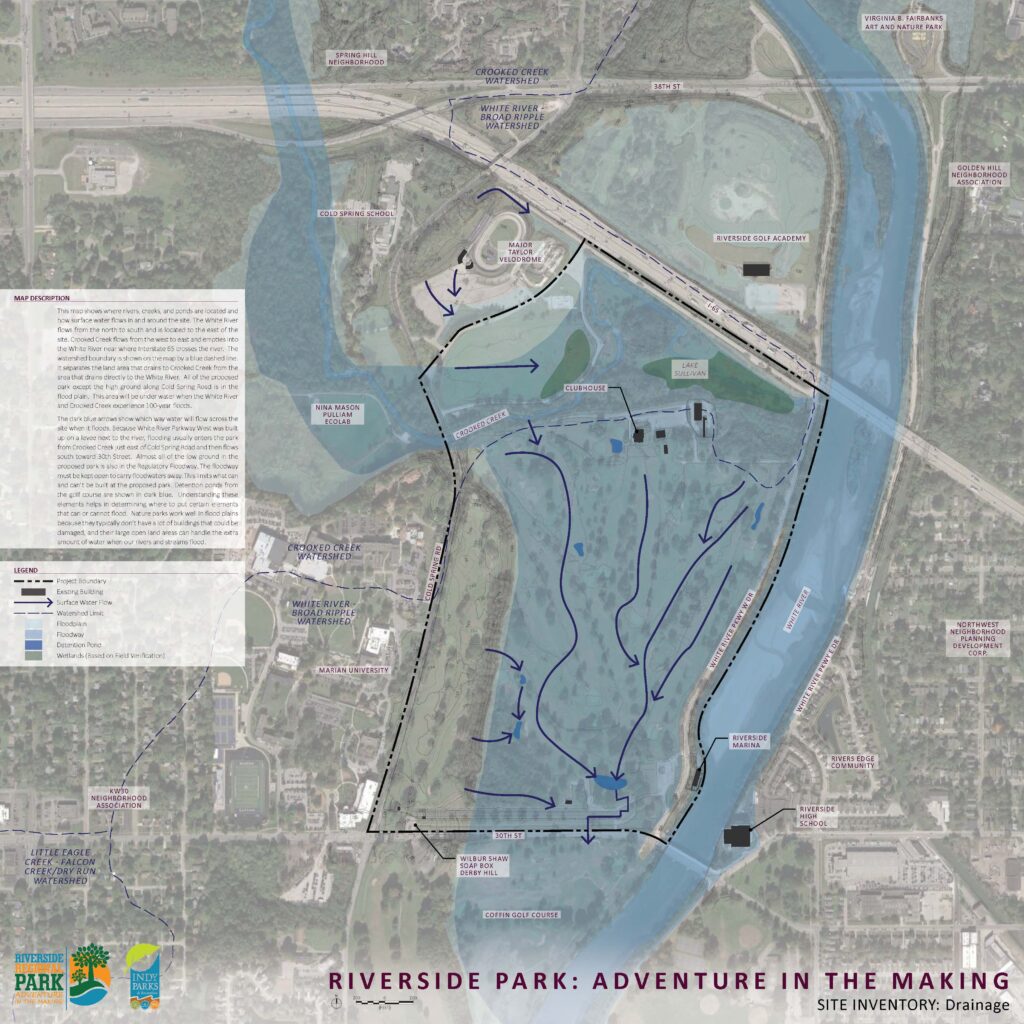 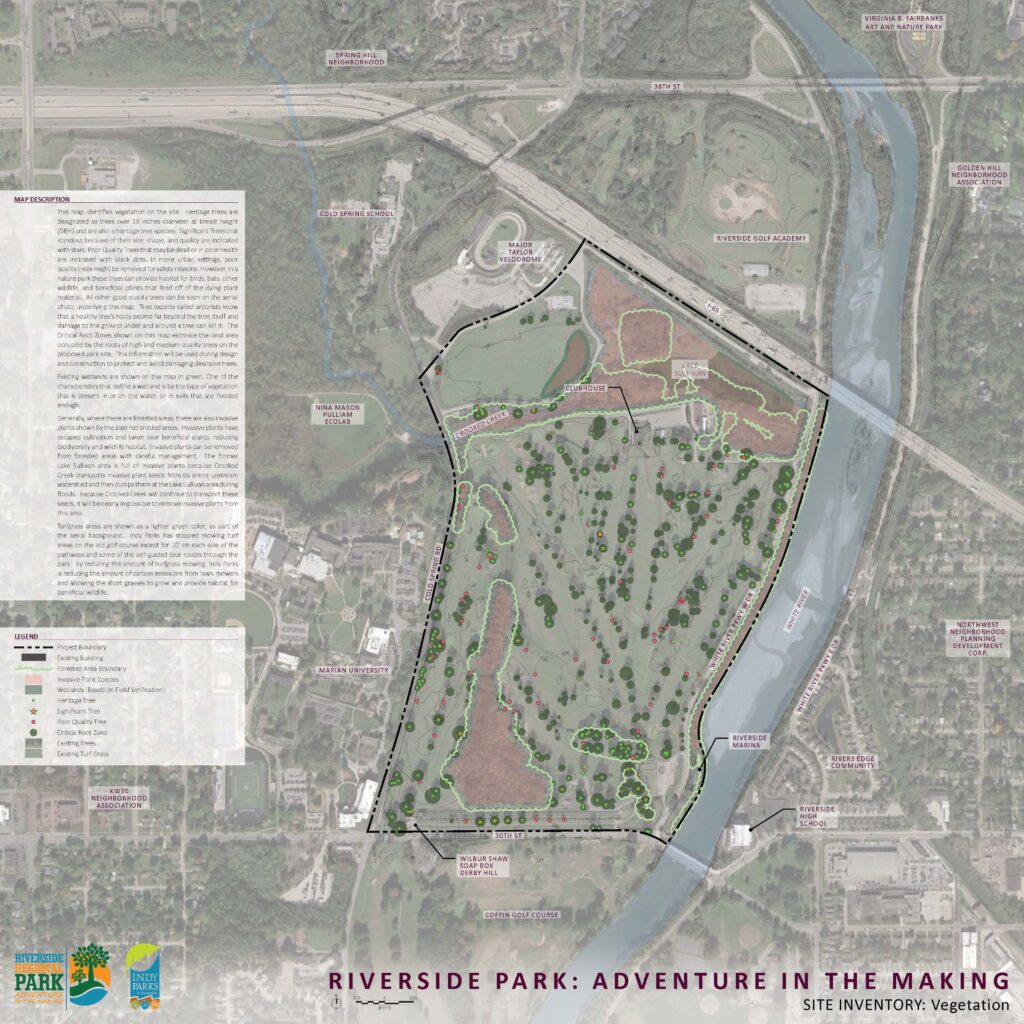 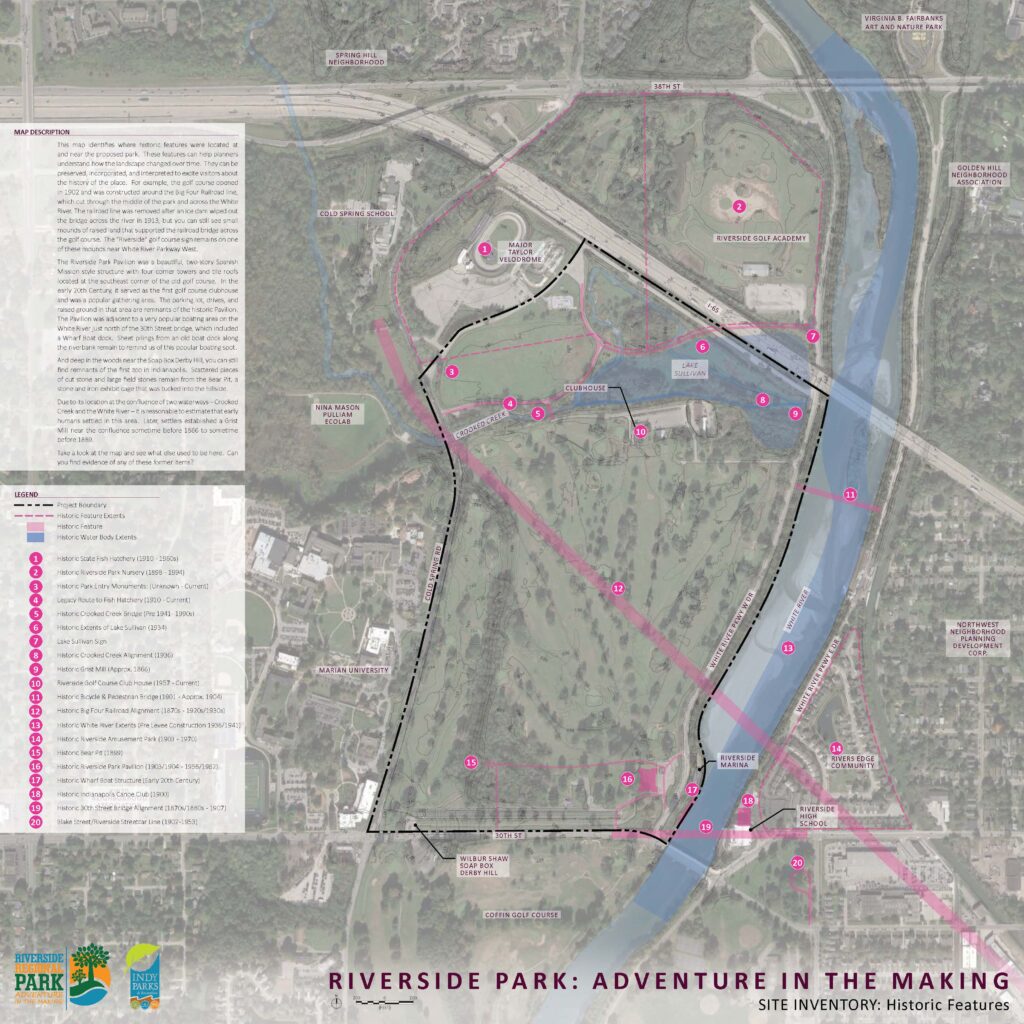 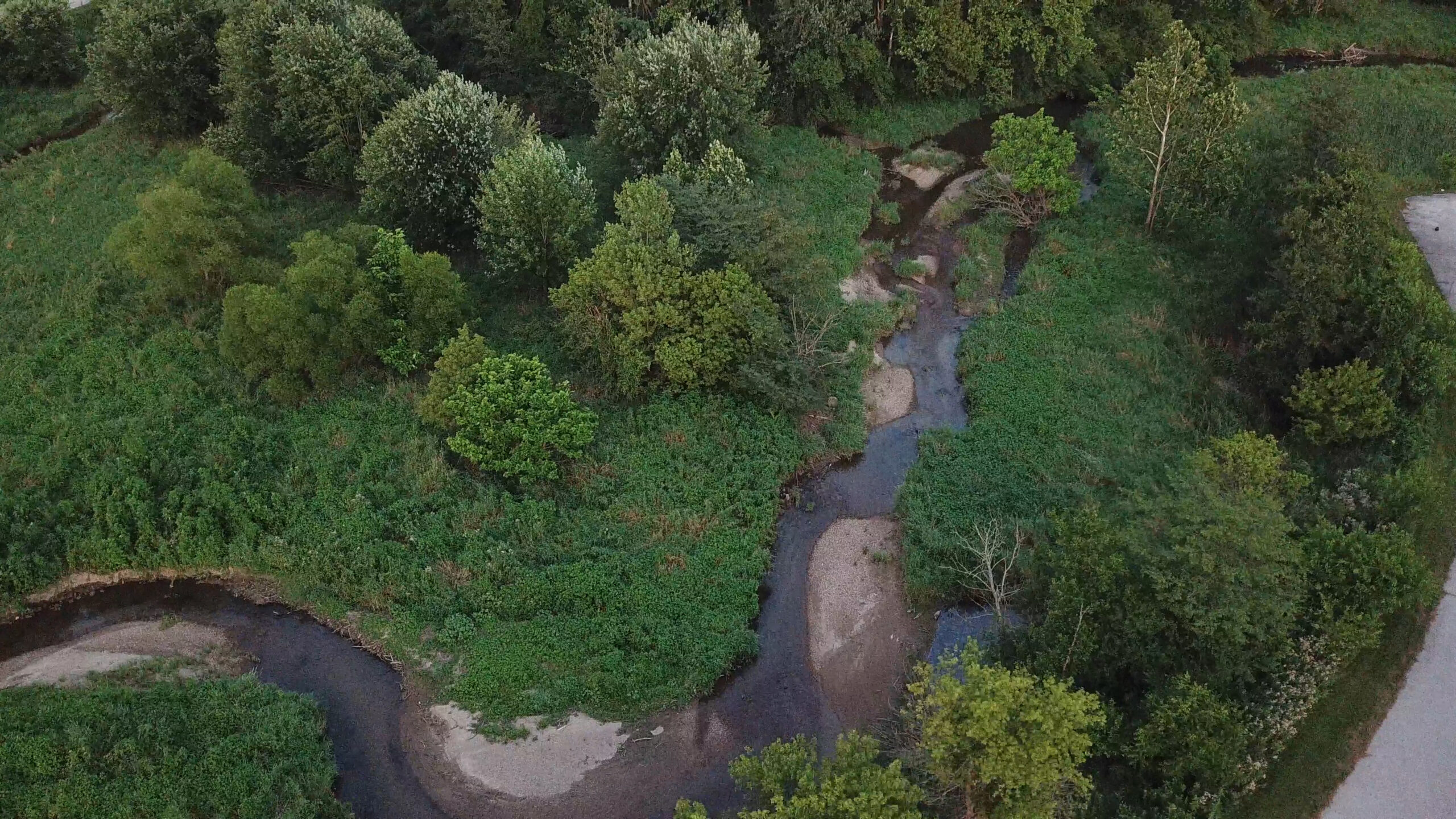 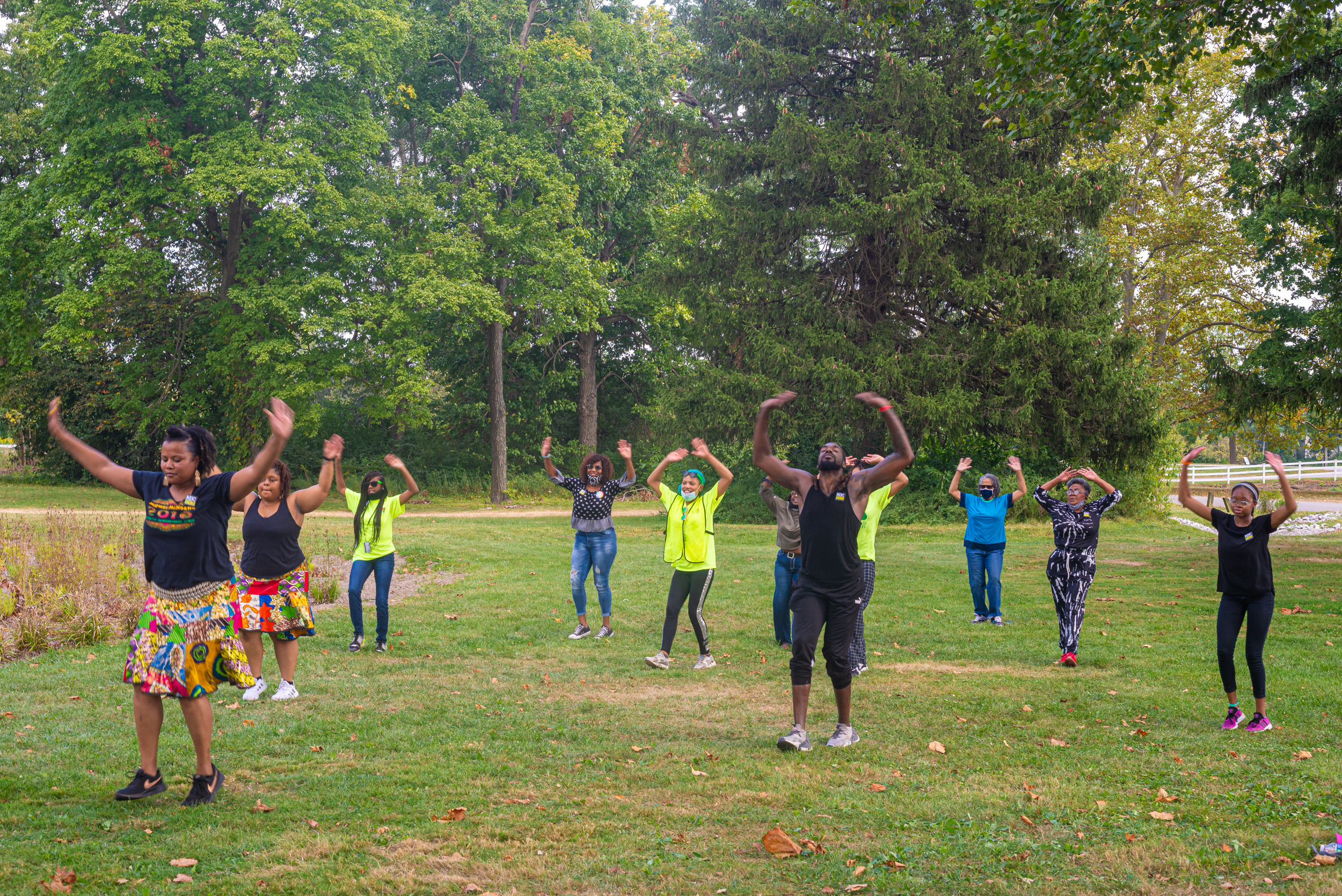 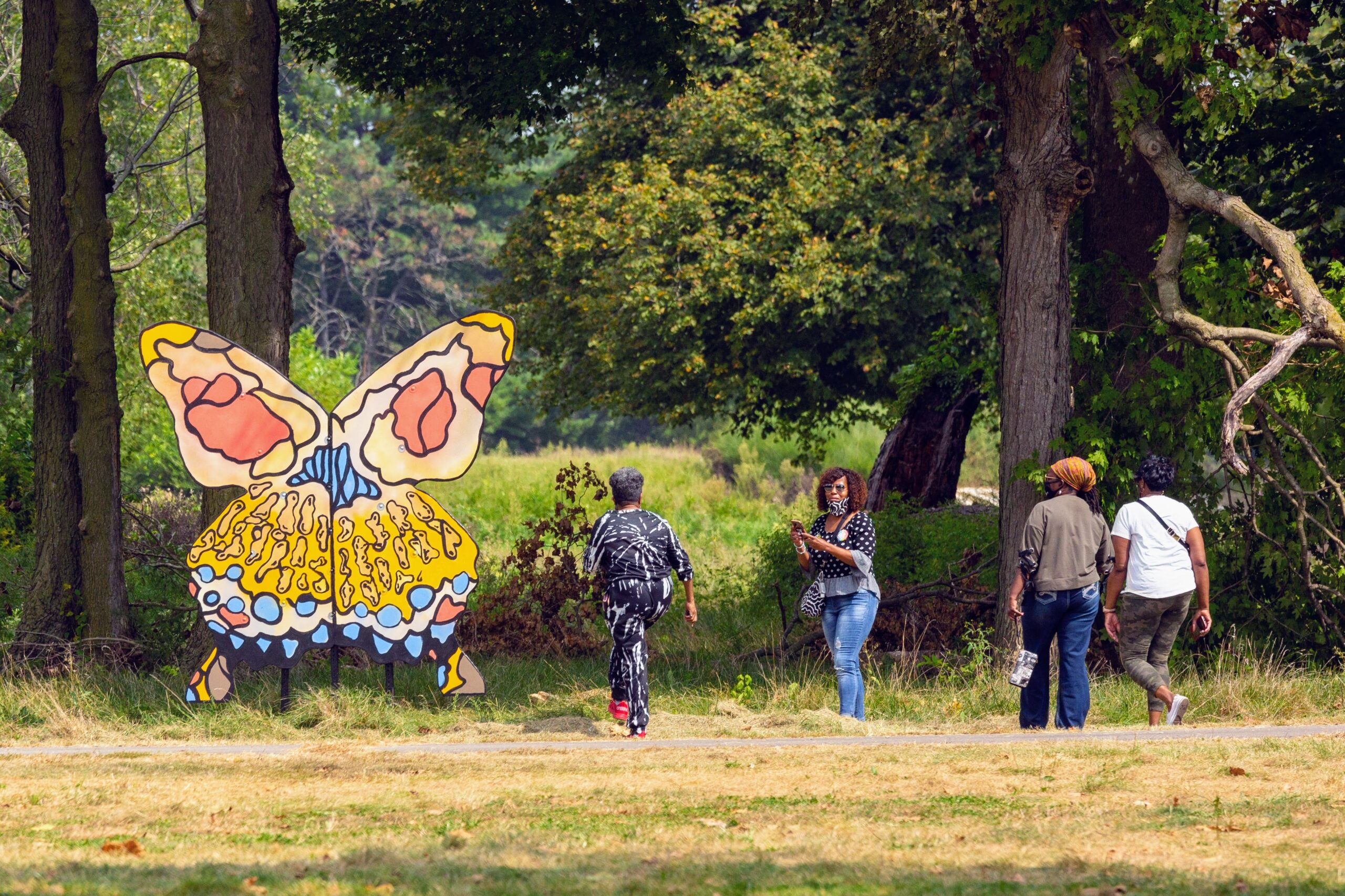 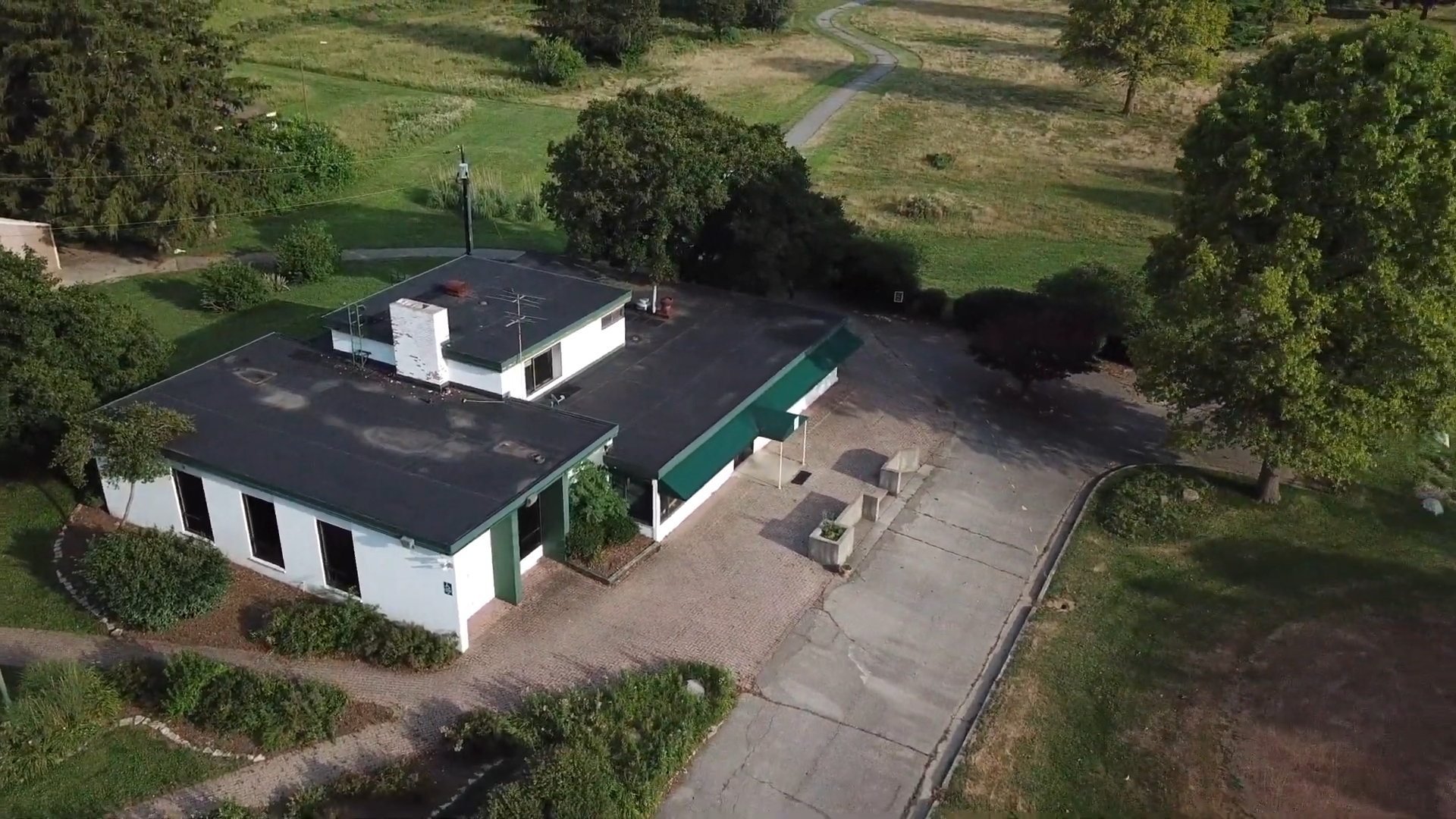 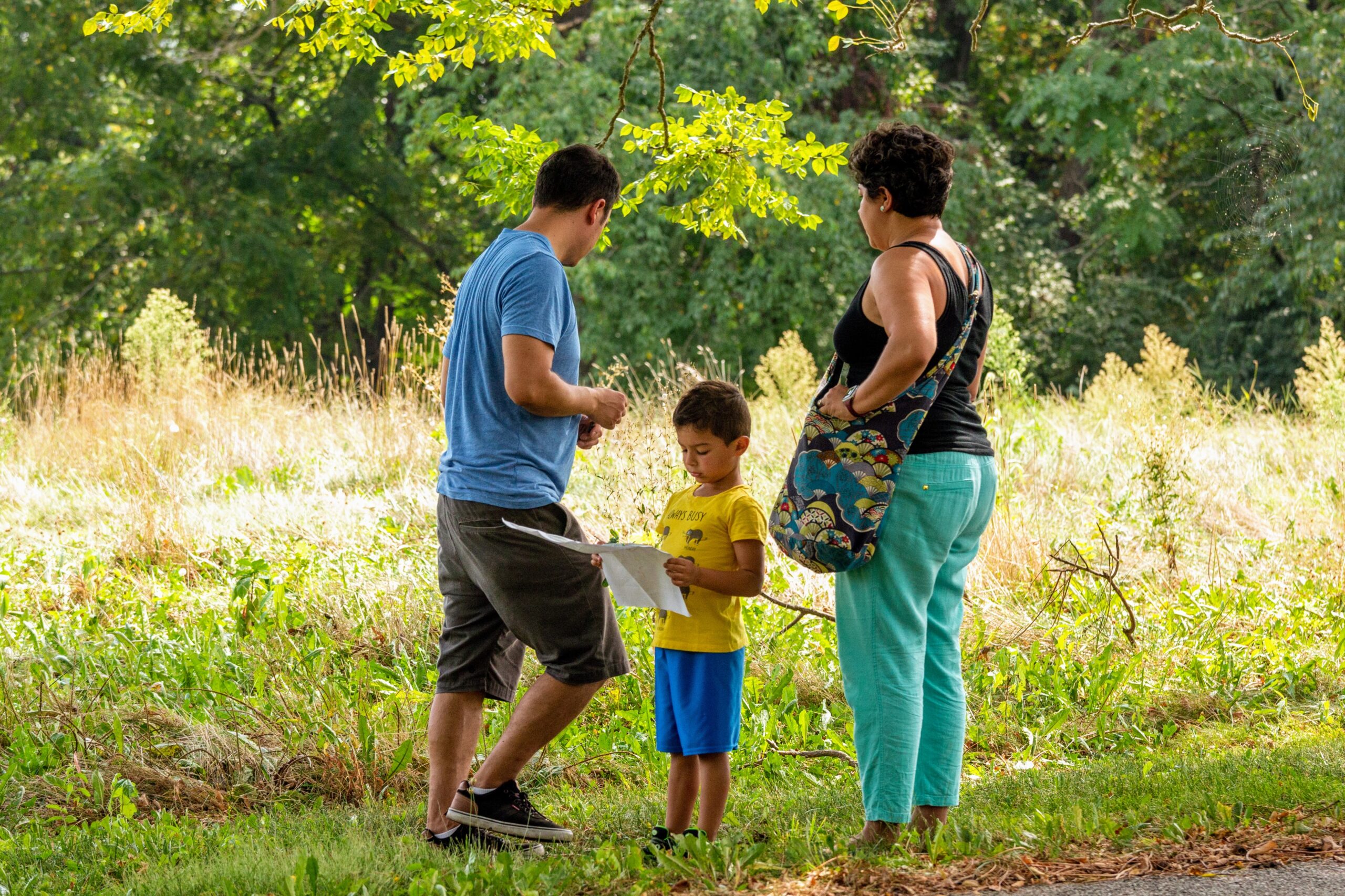 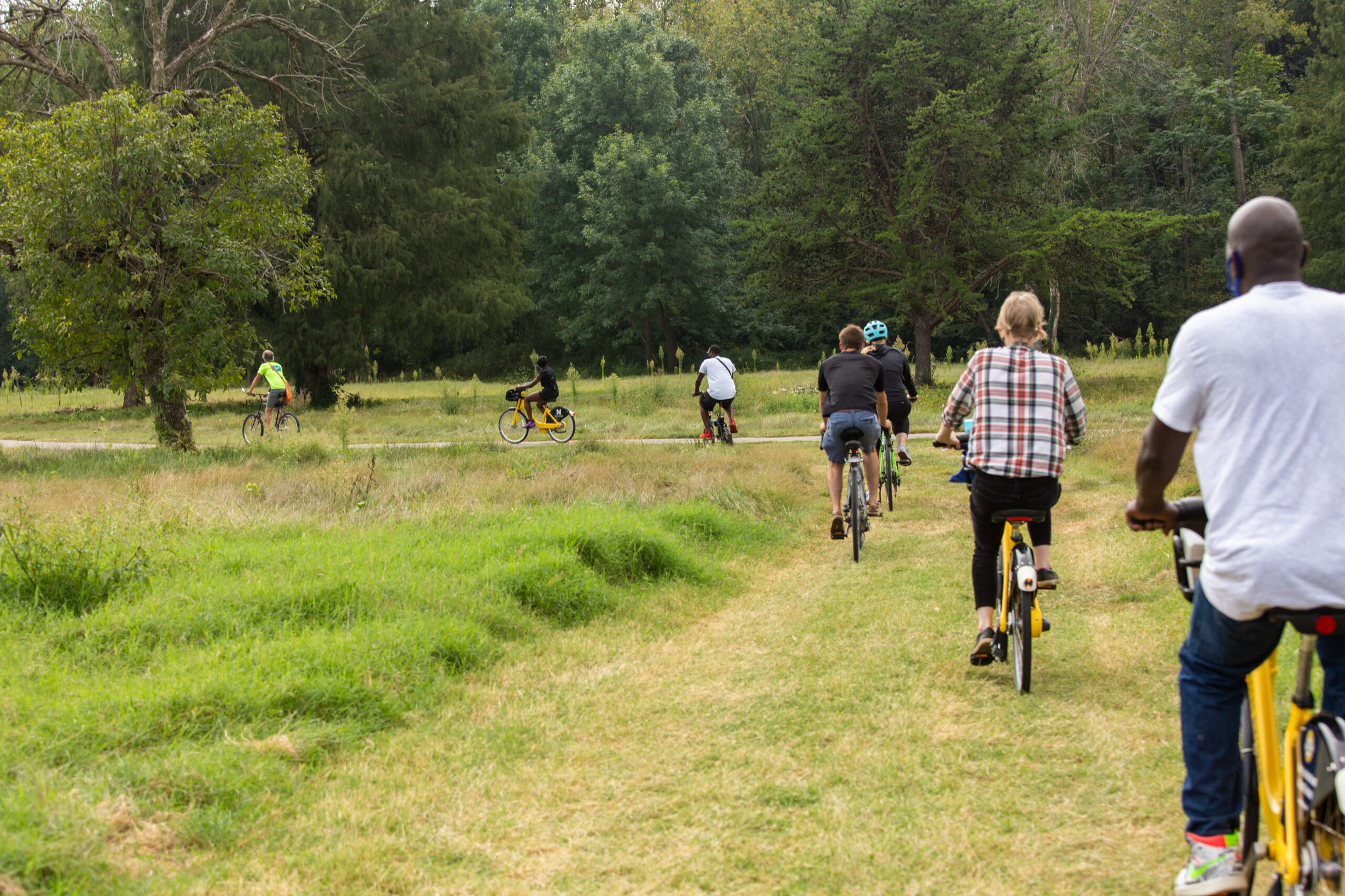 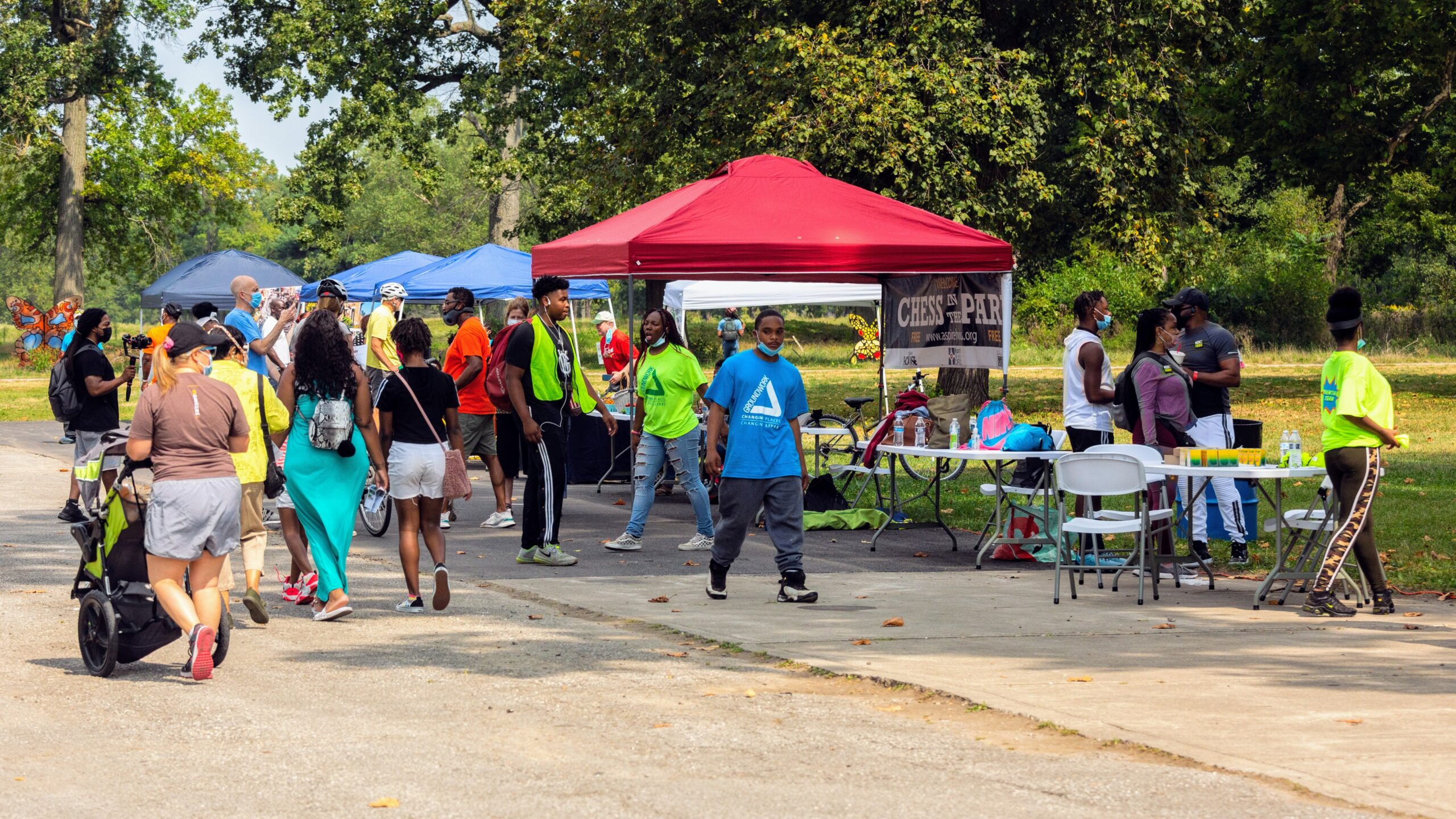 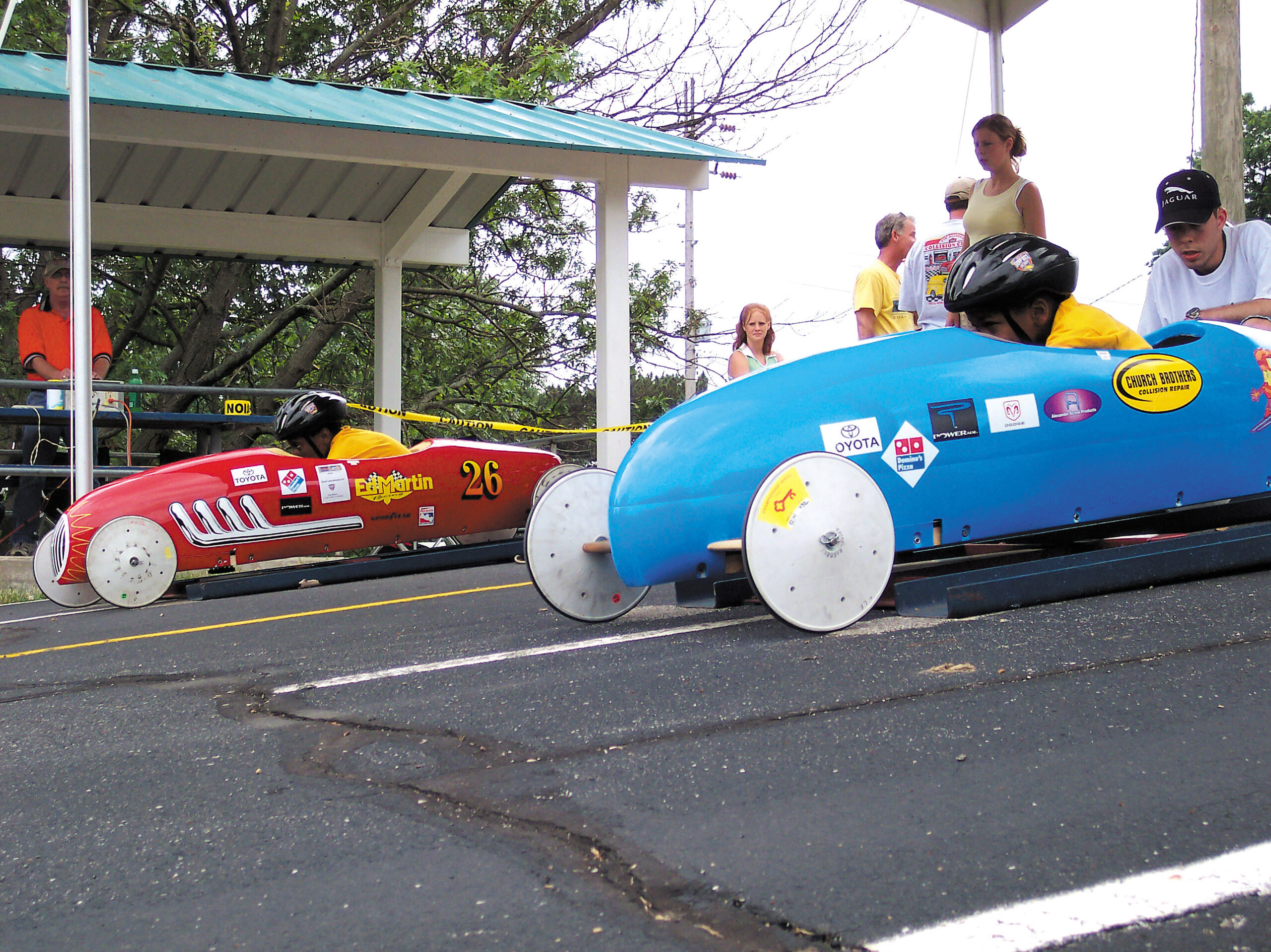 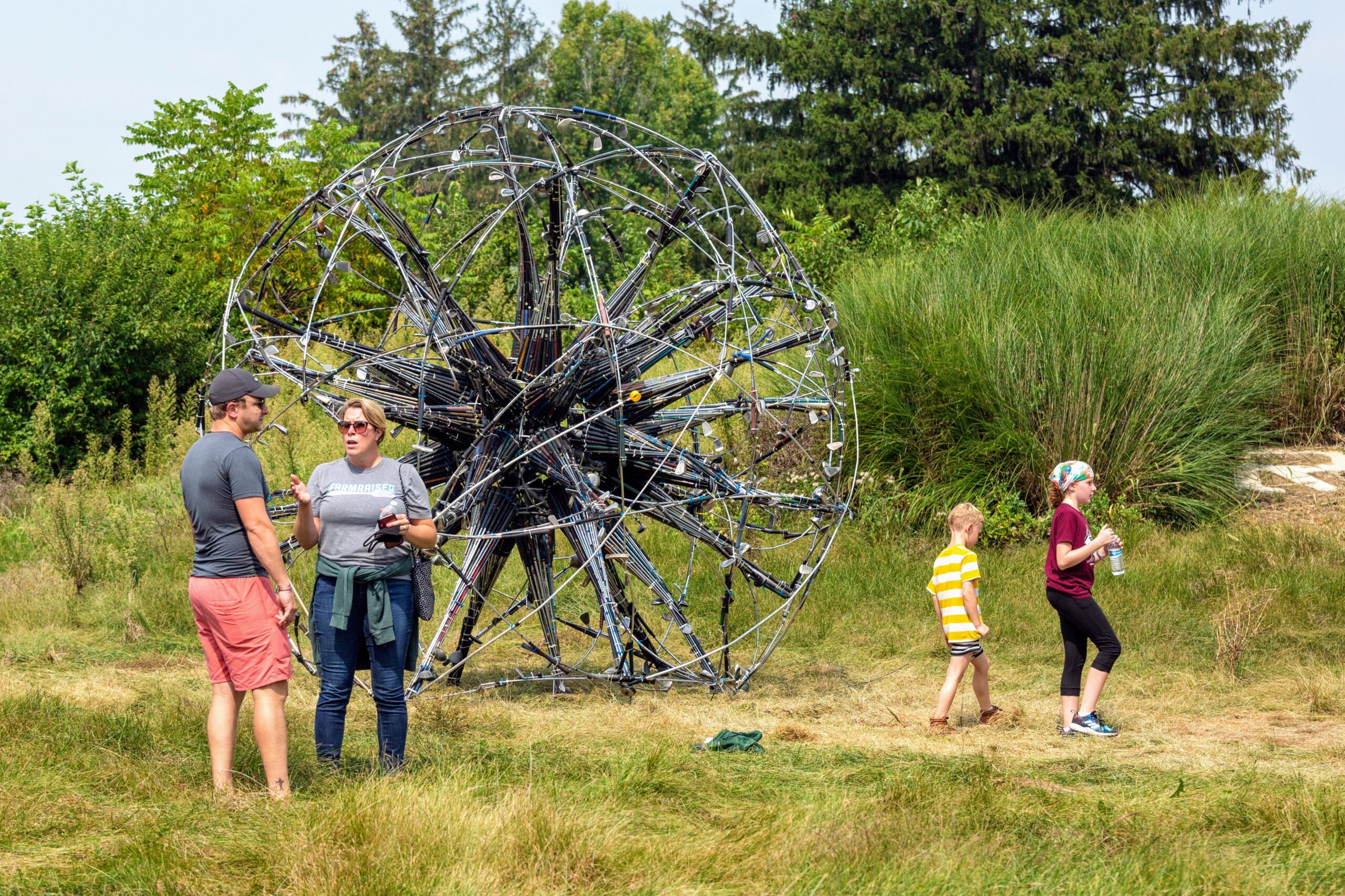 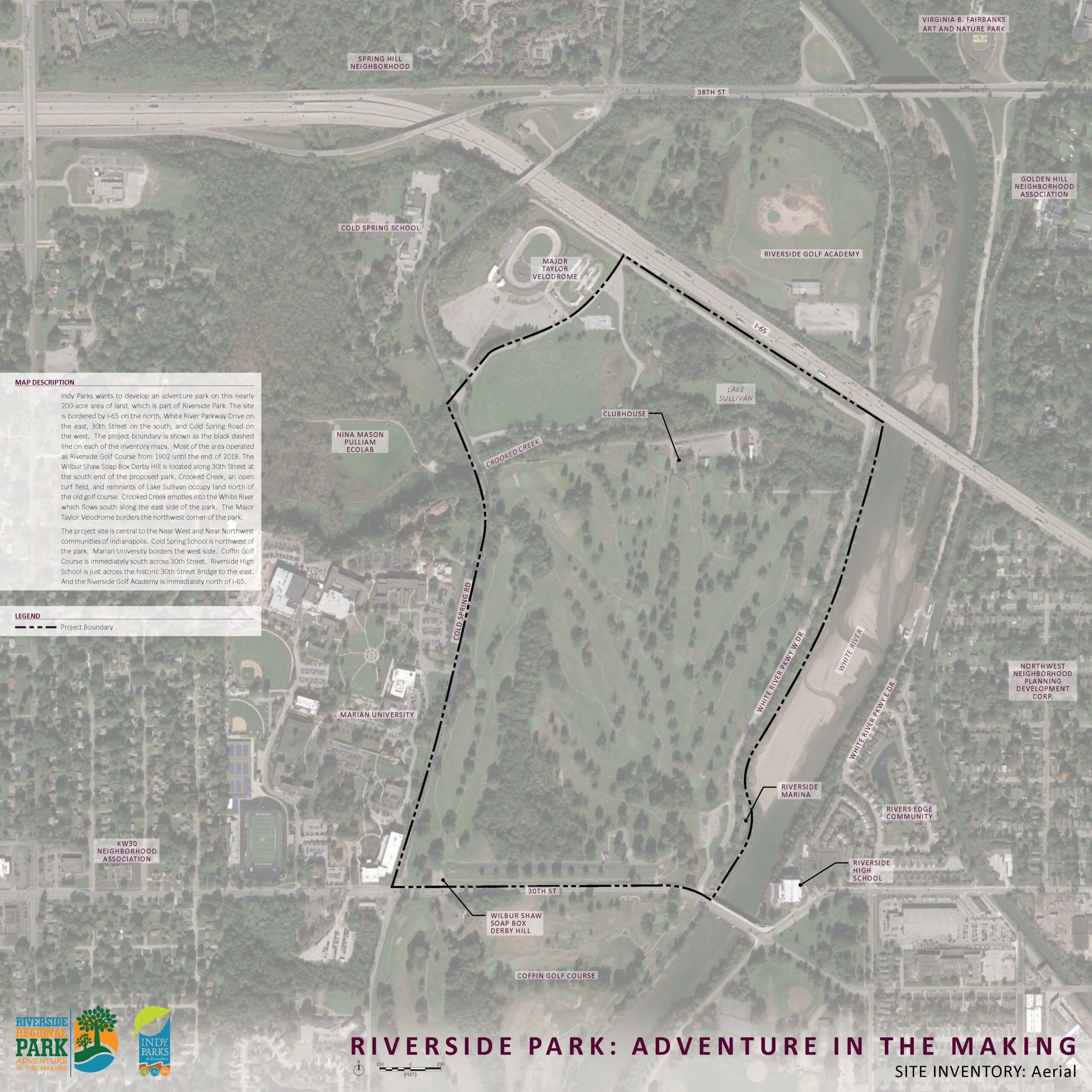 Indy Parks wants to develop an adventure park on this nearly 200-acre area of land, which is part of Riverside Park. The site is bordered by I-65 on the north, White River Parkway Drive on the east, 30th Street on the south, and Cold Spring Road on the west.  The project boundary is shown as the black dashed line on each of the inventory maps.  Most of the area operated as Riverside Golf Course from 1902 until the end of 2019. The Wilbur Shaw Soap Box Derby Hill is located along 30th Street at the south end of the proposed park. Crooked Creek, an open turf field, and remnants of Lake Sullivan occupy land north of the old golf course.  Crooked Creek empties into the White River which flows south along the east side of the park.  The Major Taylor Velodrome borders the northwest corner of the park.

The project site is central to the Near West and Near Northwest communities of Indianapolis.  Cold Spring School is northwest of the park.  Marian University borders the west side.  Coffin Golf Course is immediately south across 30th Street.  Riverside High School is just across the historic 30th Street Bridge to the east.  And the Riverside Golf Academy is immediately north of I-65. 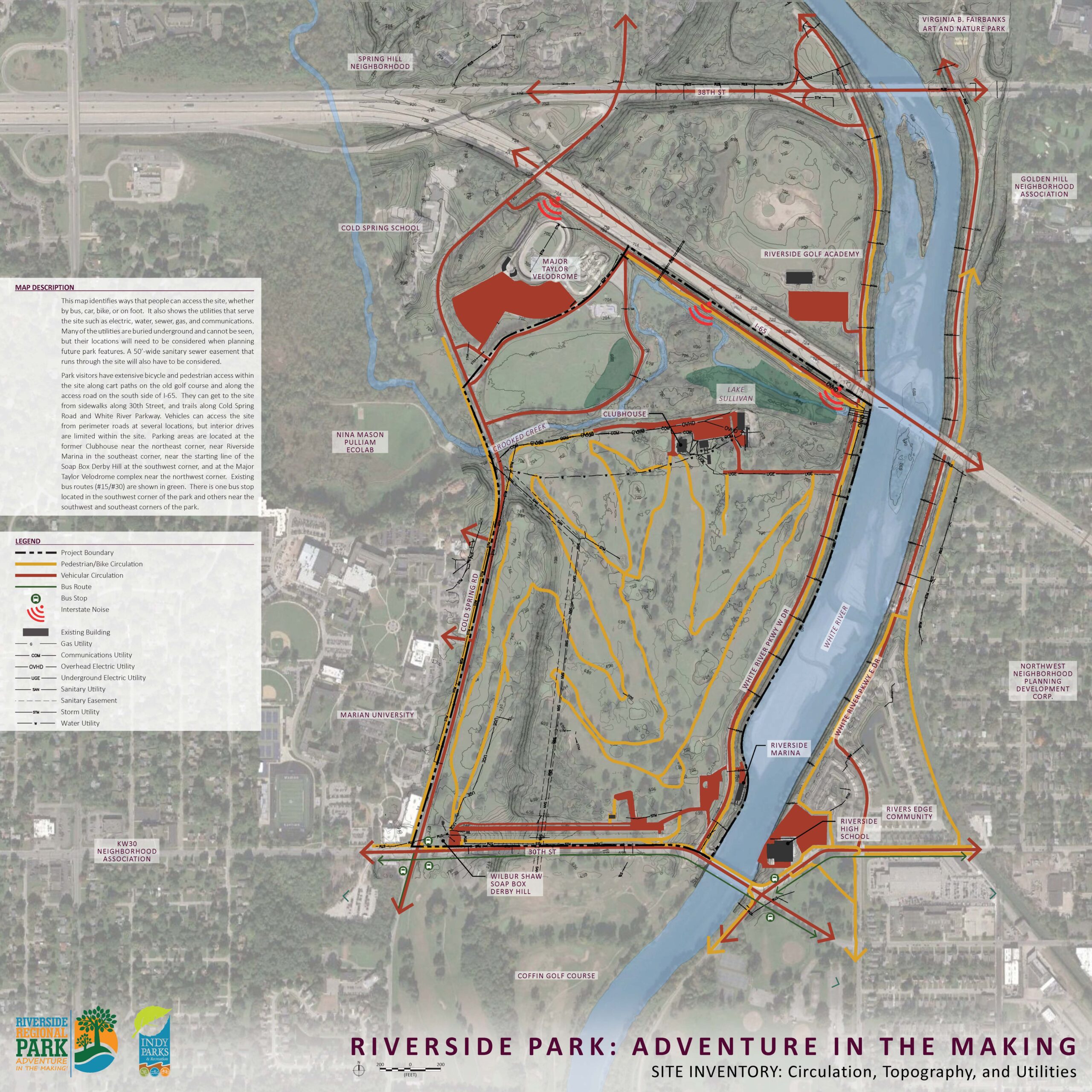 This map identifies ways that people can access the site, whether by bus, car, bike, or on foot.  It also shows the utilities that serve the site such as electric, water, sewer, gas, and communications. Many of the utilities are buried underground and cannot be seen, but their locations will need to be considered when planning future park features. A 50’-wide sanitary sewer easement that runs through the site will also have to be considered.

Park visitors have extensive bicycle and pedestrian access within the site along cart paths on the old golf course and along the access road on the south side of I-65.  They can get to the site from sidewalks along 30th Street, and trails along Cold Spring Road and White River Parkway. Vehicles can access the site from perimeter roads at several locations, but interior drives are limited within the site.  Parking areas are located at the former Clubhouse near the northeast corner, near Riverside Marina in the southeast corner, near the starting line of the Soap Box Derby Hill at the southwest corner, and at the Major Taylor Velodrome complex near the northwest corner. 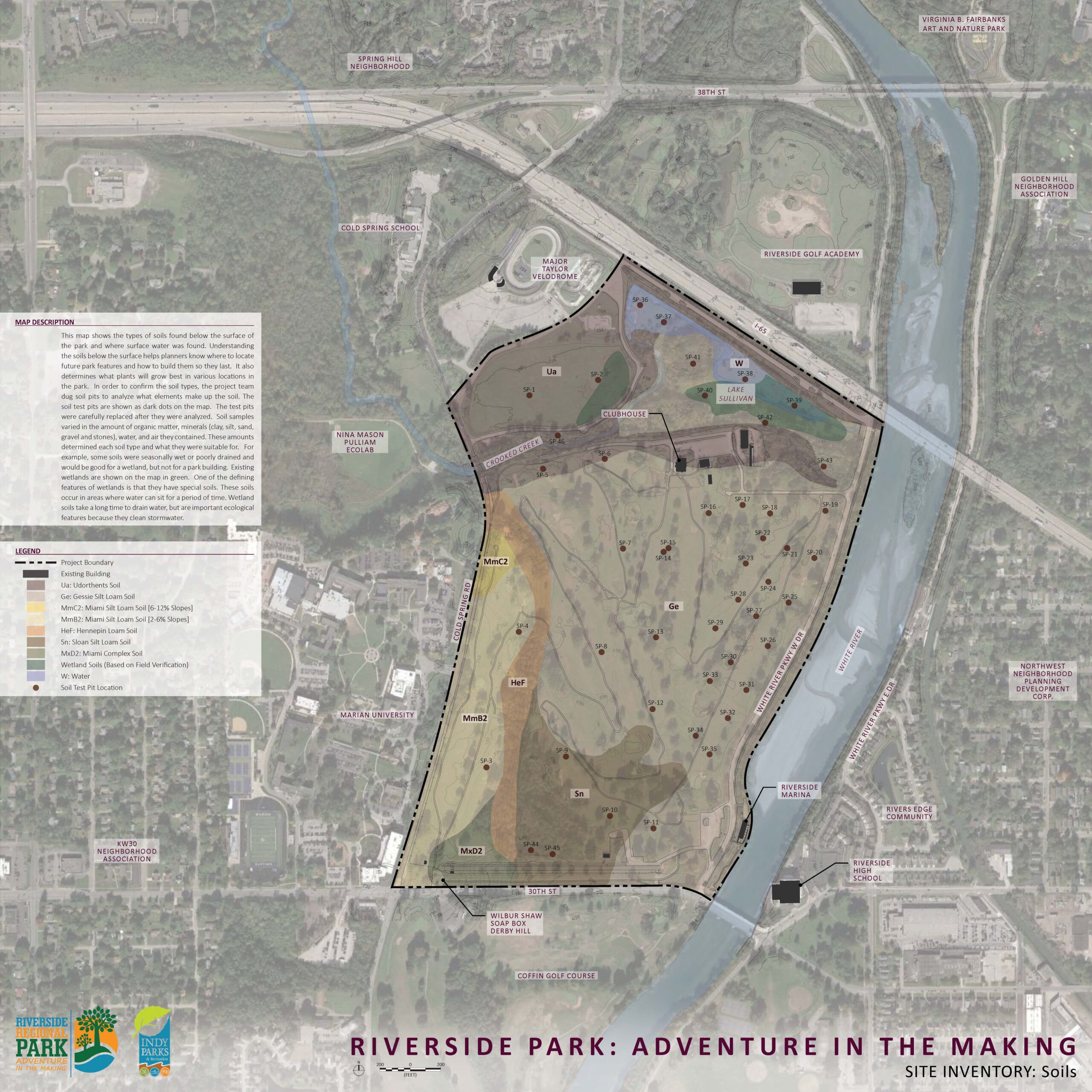 This map shows the types of soils found below the surface of the park and where surface water was found. Understanding the soils below the surface helps planners know where to locate future park features and how to build them so they last.  It also determines what plants will grow best in various locations in the park.  In order to confirm the soil types, the project team dug soil pits to analyze what elements make up the soil. The soil test pits are shown as dark dots on the map.  The test pits were carefully replaced after they were analyzed.  Soil samples varied in the amount of organic matter, minerals (clay, silt, sand, gravel and stones), water, and air they contained. These amounts determined each soil type and what they were suitable for.   For example, some soils were seasonally wet or poorly drained and would be good for a wetland, but not for a park building.  Existing wetlands are shown on the map in green.  One of the defining features of wetlands is that they have special soils. These soils occur in areas where water can sit for a period of time. Wetland soils take a long time to drain water, but are important ecological features because they clean stormwater. 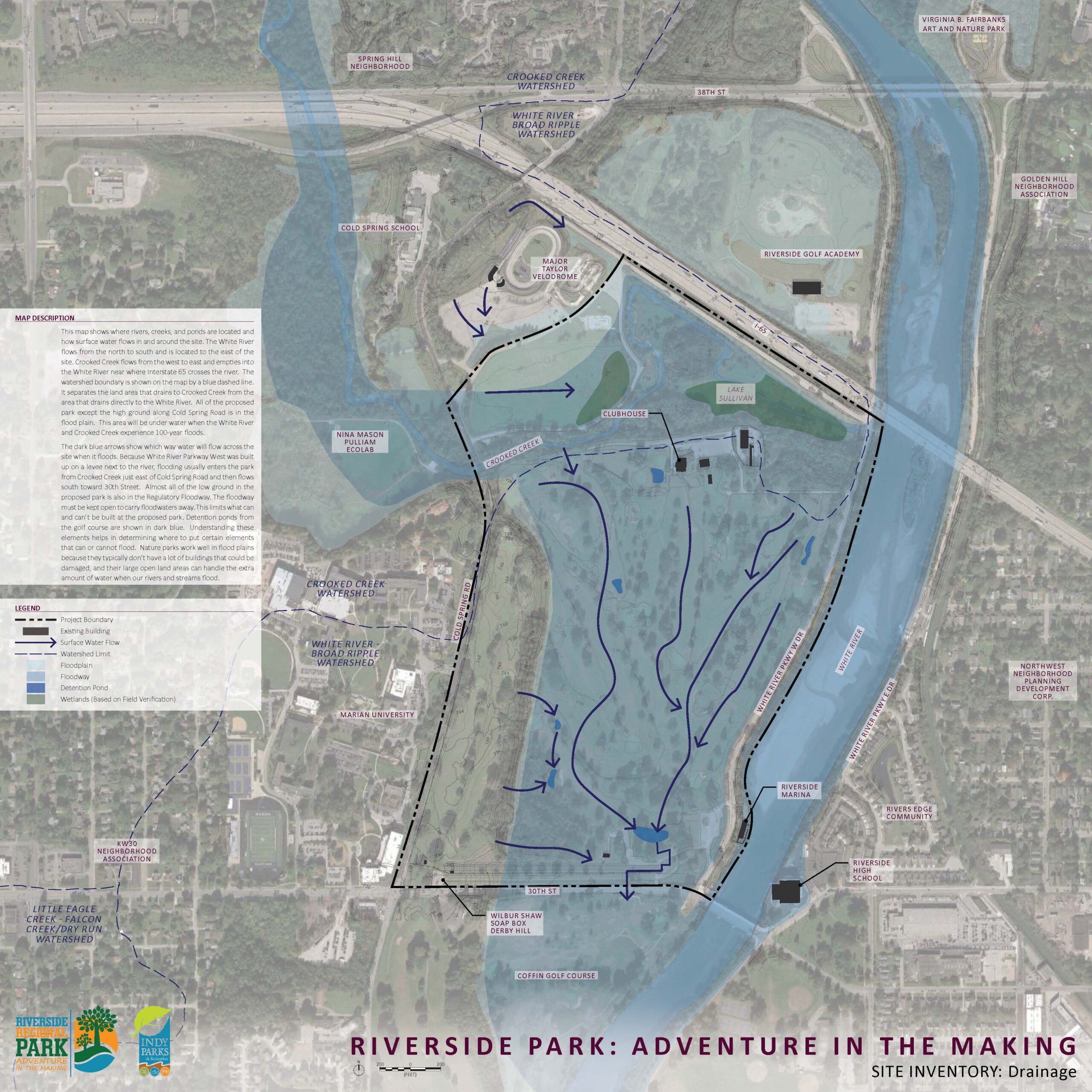 The dark blue arrows show which way water will flow across the site when it floods. Because White River Parkway West was built up on a levee next to the river, flooding usually enters the park from Crooked Creek just east of Cold Spring Road and then flows south toward 30th Street.  Almost all of the low ground in the proposed park is also in the Regulatory Floodway. The floodway must be kept open to carry floodwaters away. This limits what can and can’t be built at the proposed park. Detention ponds from the golf course are shown in dark blue.  Understanding these elements helps in determining where to put certain elements that can or cannot flood.  Nature parks work well in flood plains because they typically don’t have a lot of buildings that could be damaged, and their large open land areas can handle the extra amount of water when our rivers and streams flood. 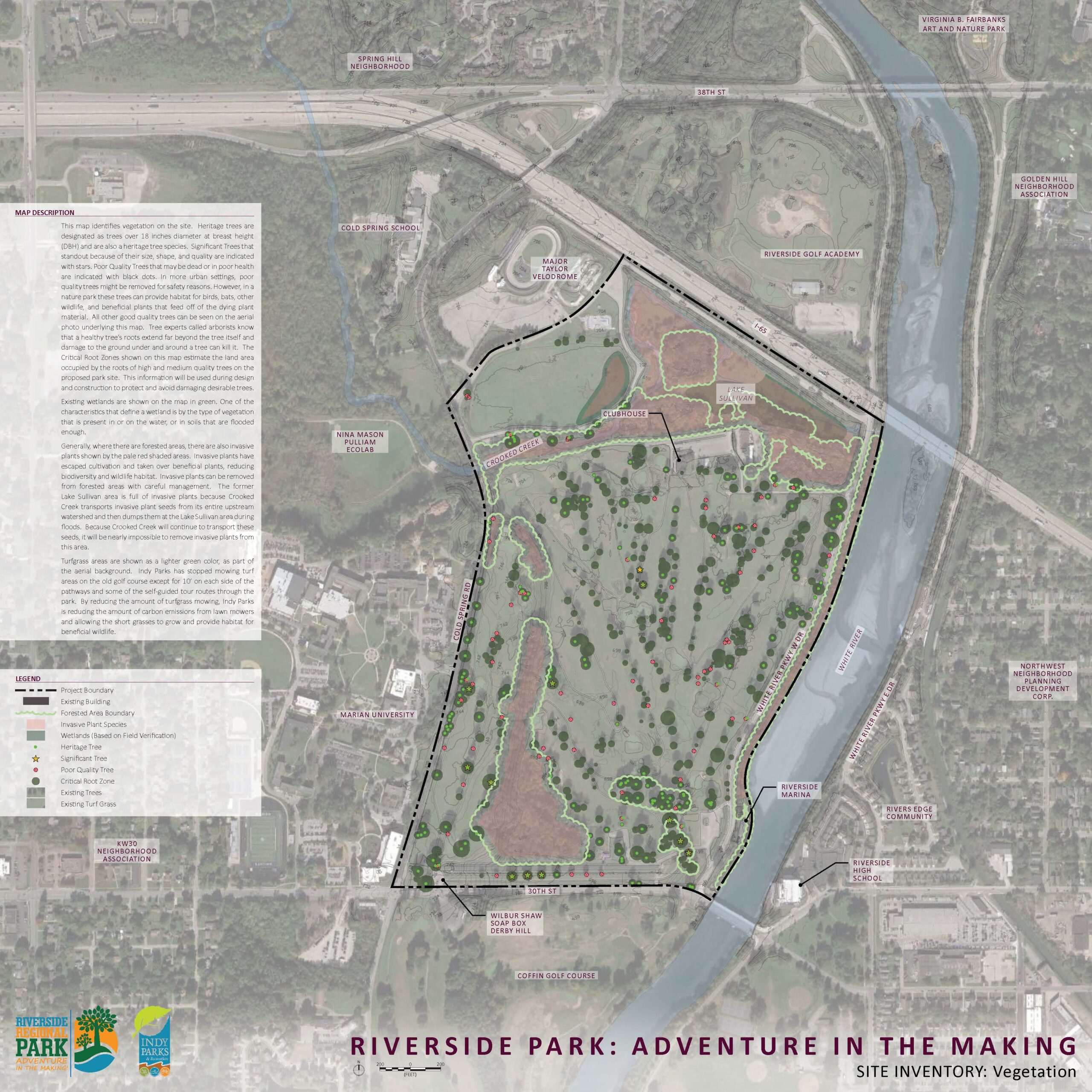 This map identifies vegetation on the site.  Heritage trees are designated as trees over 18 inches diameter at breast height (DBH) and are also a heritage tree species.  Significant Trees that standout because of their size, shape, and quality are indicated with stars. Poor Quality Trees that may be dead or in poor health are indicated with black dots. In more urban settings, poor quality trees might be removed for safety reasons. However, in a nature park these trees can provide habitat for birds, bats, other wildlife, and beneficial plants that feed off of the dying plant material.  All other good quality trees can be seen on the aerial photo underlying this map.  Tree experts called arborists know that a healthy tree’s roots extend far beyond the tree itself and damage to the ground under and around a tree can kill it.  The Critical Root Zones shown on this map estimate the land area occupied by the roots of high and medium quality trees on the proposed park site.  This information will be used during design and construction to protect and avoid damaging desirable trees.

Existing wetlands are shown on the map in green. One of the characteristics that define a wetland is by the type of vegetation that is present in or on the water, or in soils that are flooded enough.

Turfgrass areas are shown as a lighter green color, as part of the aerial background.  Indy Parks has stopped mowing turf areas on the old golf course except for 10’ on each side of the pathways and some of the self-guided tour routes through the park.  By reducing the amount of turfgrass mowing, Indy Parks is reducing the amount of carbon emissions from lawn mowers and allowing the short grasses to grow and provide habitat for beneficial wildlife. 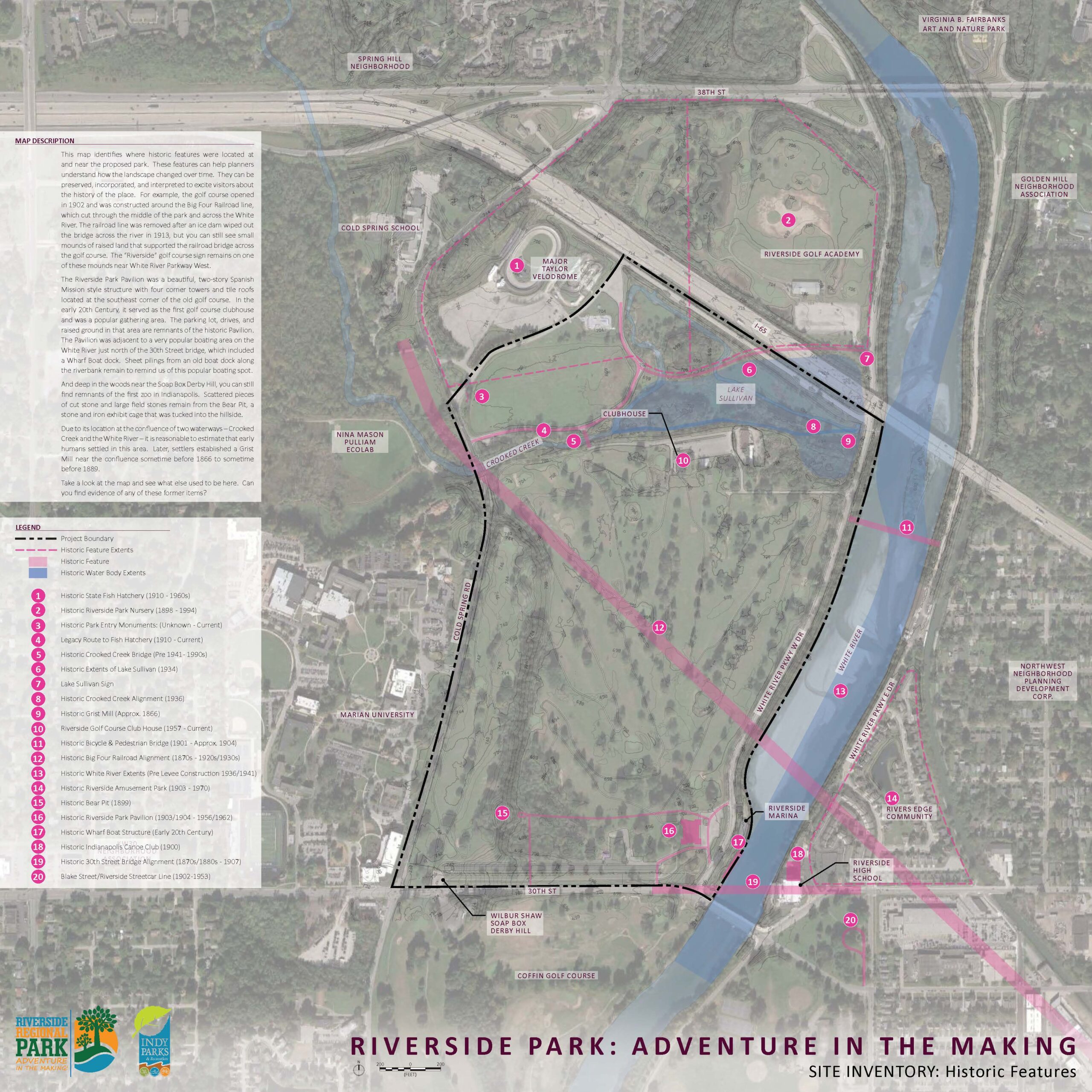 This map identifies where historic features were located at and near the proposed park.  These features can help planners understand how the landscape changed over time.  They can be preserved, incorporated, and interpreted to excite visitors about the history of the place.  For example, the golf course opened in 1902 and was constructed around the Big Four Railroad line, which cut through the middle of the park and across the White River. The railroad line was removed after an ice dam wiped out the bridge across the river in 1913, but you can still see small mounds of raised land that supported the railroad bridge across the golf course.  The “Riverside” golf course sign remains on one of these mounds near White River Parkway West.

The Riverside Park Pavilion was a beautiful, two-story Spanish Mission style structure with four corner towers and tile roofs located at the southeast corner of the old golf course.  In the early 20th Century, it served as the first golf course clubhouse and was a popular gathering area.  The parking lot, drives, and raised ground in that area are remnants of the historic Pavilion.  The Pavilion was adjacent to a very popular boating area on the White River just north of the 30th Street bridge, which included a Wharf Boat dock.  Sheet pilings from an old boat dock along the riverbank remain to remind us of this popular boating spot.

And deep in the woods near the Soap Box Derby Hill, you can still find remnants of the first zoo in Indianapolis.  Scattered pieces of cut stone and large field stones remain from the Bear Pit, a stone and iron exhibit cage that was tucked into the hillside.

Take a look at the map and see what else used to be here.  Can you find evidence of any of these former items?